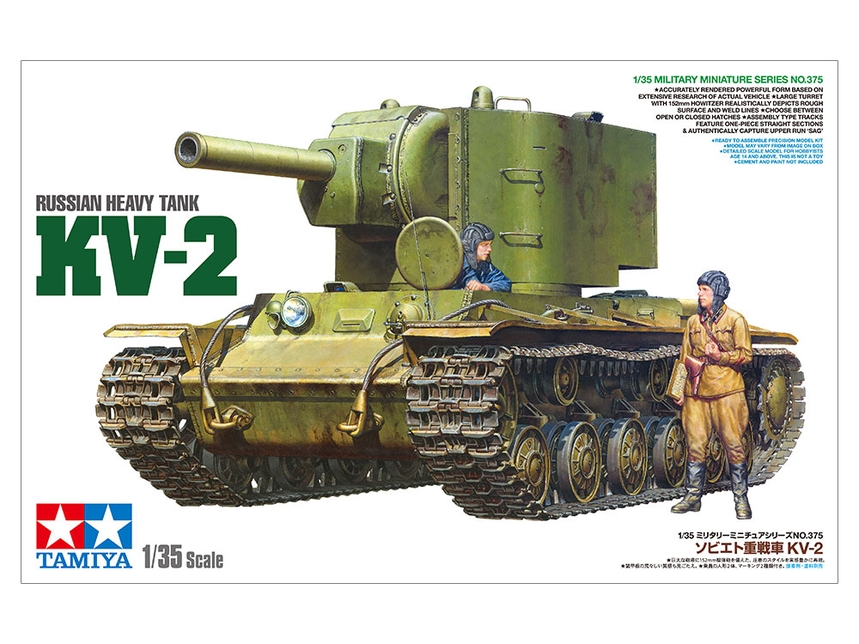 This 1/35 scale assembly kit recreates the Russian Heavy Tank KV-2, a heavier variant of the KV-1 (Item 35372). The Russian Heavy Tank KV-2 was developed and produced at the same time as the KV-1 chassis, but it incorporated a massive, boxy turret equipped with a 152mm howitzer. Although its weight caused frequent machinery failure during the early part of the German-Soviet War from June, 1941, it?s also recorded that one KV-2 single handedly held up one German division, for a few days. The KV-2 concept also played a role in the development of heavy self-propelled guns such as the JSU-152.

? 1/35 scale plastic model assembly kit.
? Road wheels are no-rib types which were seen on the KV-2 and early KV-1 models, plus return rollers with rubber rims.
? Features large-diameter idler wheels which were equipped with the early and middle production models. (The KV-1 model has small-diameter late production type.)
? The massive turret with 152mm howitzer is box-type assembly, and its surface such as armor plate and weld lines are authentically depicted.
? Main gun barrel has a realistic rendering of rifling near the muzzle.

? The lower and upper hulls, and tracks are the same as the ones of the KV-1 kit.
? Assembly type tracks feature one-piece straight sections and recreate upper run ?sag?.
? Choose between open or closed hatches.
? Comes with two marking options, one crew torso, and one commander full figure.