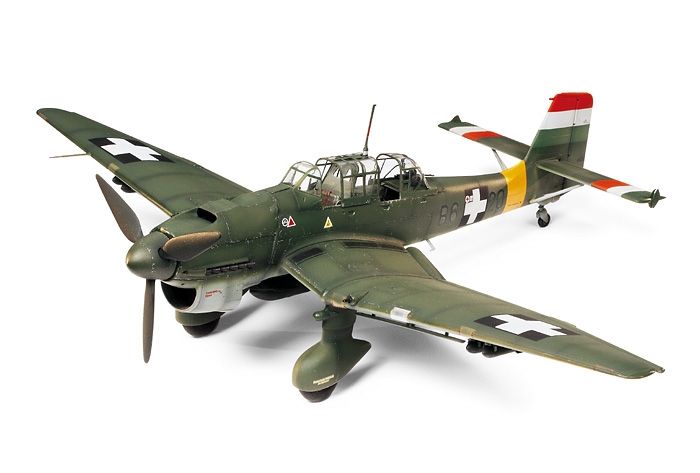 This model assembly kit recreates the iconic WWII era dive bomber, Junkers Ju87 B-2 Stuka. The Junkers Ju87 Stuka dive bomber was developed in 1934 and scenes of them diving down on their targets became synonymous with the German Blitzkrieg. Of the many variants which were produced, the Ju87 B was the mainstay of the Lufwaffe in the early years of WWII. The rugged aircraft featured inverted gull wings and fixed landing gear and was powered by a 1,200hp Junkers Jumo 211D engine. It could precisely deliver a maximum bomb load of 1,000kg in a 90-degree dive, during which its sirens would blare to terrify the Allied troops below. Although they suffered heavy losses during the Battle of Britain, they continued to be used to good effect in other theaters such as the Mediterranean, Russia, and the Balkans.? 1/48 scale assembly model kit of the Junkers Ju87 B-2 dive bomber. Length: 230mm, Wingspan: 290mm? A set of photo-etched parts is included to add detail to areas such as the cockpit.? Parts are included to depict the engine and the engine cowling can be detached.? Includes parts for a 500kg and four 50kg bombs.? Comes with a bomb loading cart and 2 ground crew figures to enable creation of a simple diorama straight from the box.? Choose from 5 marking options, including a Hungarian Air Force aircraft.? Parts for aircraft model are made by Italeri.