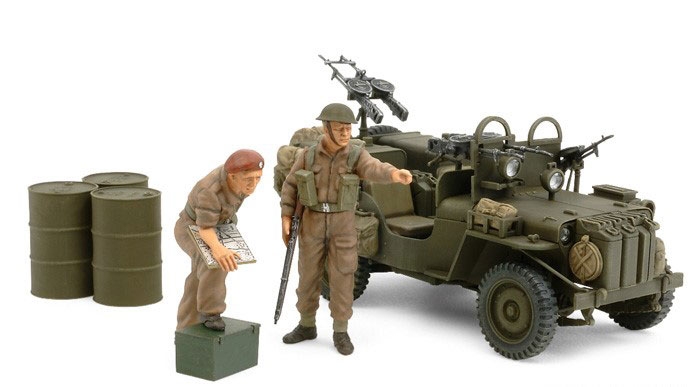 The British Special Air Service (SAS) was established in 1941, and throughout WWII they engaged in various commando missions including carrying out surprise attacks against critical sites such as airfields and supply bases behind enemy lines. For such operations, they used vehicles which were heavily armed with machine guns. These vehicles were also fitted with various equipment as well as additional spare fuel tanks to enable long range operation. This kit recreates a version at the European Front after the 1944 Normandy Invasion while Item 35033 depicts a version at the North African Front.? 1/35 scale plastic assembly kit. Length: 96mm.? Vehicle parts are products of Italeri.? Model depicts a vehicle used on the European Front after the 1944 Normandy Invasion.? Accessory parts such as jerry cans included.? Kit also includes 2 Tamiya figures (1 infantry and 1 S.A.S. member) to enable instant diorama creation straight from the box.? Note: Kit does not have any decals.