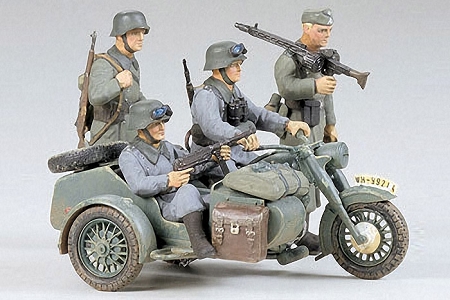 The Treaty of Versailles concluded after Germany's defeat in World War I stipulated that the German Army should not consist of more tha 100,000 officers and men nor possess even tanks or armoured cars. Under these circumstances, the Reichswehr paid it attention to motorcycles (kraftrad or krad) as a successor to cavalry orderly and bicycle orderly, and started to concentrate its energies upon production of cars, transport lorries and motorcycles for mechanization of fighting troops. Motorcycles among others were first used as the main body of mechanized troops since they had such advantages that they were relatively inexpensive and those developed for non-military use could be used as they were. It was the BMW Model R75 having tough body and reverse gear that appeared at this point of time and displayed excellent ability. BMW's traditional 2-cylinder flat engine of 746cc had a maximum output of 26hp and gave the 400kg motorcycle with a sidecar a maximum speed of 95km/h. Carrying an MG34 or sometimes even at trench mortar on its sidecar, the R75 served as the spearhead of attacks and showed activity. It was also used by the Waffen S.S. which guarded Hitler. A large number of the R75 were employed by the Afrika Korps under the command of General Rommel and stood battles in severe, hot deserts, which raised its reputation further.