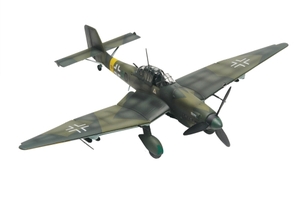 Description
The Stuka had fourteen variants of which the Ju87D's were the last and most popular. They were powered by the Junkers Jumo 211J-1 engine with 12-cylinders and (1,410-hp). The first version of this famous plane the Ju 87-1 saw action in 1937 with the Condor Legion in Spain. Joined in 1938 and 1939 by the later Ju 87B. The Junkers dive-bomber was more notorious than any other weapon in the German army. Within 9 months of the beginning of the war, the Ju 87 acquired an almost legendary reputation. The success of the Stuka lasted until August of 1940 when Germany launched its aerial offensive against the British Isles. Poorly armed and outmaneuvered by the defending Spitfires and Hurricanes, the Stuka paid a fearful price. By the end of August, the last of the Stuka Geschwader or dive-bomber wings was removed from action over Great Britain